The 2019 Race Season by Barbara Holmes 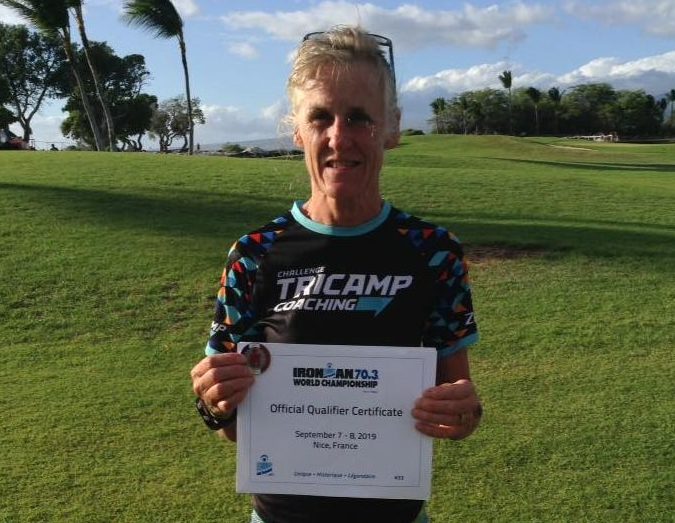 The 2019 Race Season blog by Barbara Holmes
Barbara is coached by joint head coach at Challenge Tri Camp, Nick Dunn. Barbara and Nick have a very strong athlete – coach relationship, Barbara has been coached by Nick now for 5 years, and during this time the partnership has had great success both domestically and internationally, this year has been a different year for Barbara read her blog below:-
The start of the race season started as it has for the past few years – with a week’s training in Playa de Muro, Mallorca with Challenge Tri Camp. This has become my perfect way to kick start the season with a boost to my confidence and fitness. It’s great to meet up with the friendly team and athletes in Mallorca to re-energise and focus. The added bonus this year was entering the Mallorca 312 Sportive with the team. We completed the sportive on the last day of training camp, and it turned out to be a fabulous day.
I had decided that 2019 might be my last year of Triathlon racing, as I turn 60. So with that in mind I planned to have a go at an iconic 70.3 race and concentrate only on the British Champs and ITU World Champs.   It was refreshing to see my calendar quite empty of the typical ‘qualification events’ which freed me up more for training and to focus on my A Races.
When at Challenge Tri camp in April, I caught up with Nick to talk about goals and aspirations.  The bombshell that I had kept quiet about entering was Ironman 70.3 Hawaii.  When I told Nick of my plans to race a 70.3 in Hawaii then in the following two weeks race the British Age Group Championships at both Standard and Sprint distance, Nick’s words were ‘let’s get on – there’s work to be done’!
I had chosen Hawaii 70.3 as I have always wanted to race in the ‘birthplace of Ironman’ but I knew full Ironman would always be a step too far for me, I also much prefer non wetsuit swims, and warmer climates for racing. I sold it to my husband as a holiday in paradise!!  We did love the setting for a few days relaxing. For the race itself  the swim was glorious, the bike went well until about two-thirds in, but the run was difficult in the heat and showed my weakness – something I still need to master.   2nd place female in F60-64 gained me a slot to the 70.3 World Championships Nice later in the year.
We flew home with just a few days to regain composure and get over to Leeds for the Standard Distance Age-group British Championships.  Leeds has never been my favourite race – that first horrific year in 2016 still haunts me and I find it cold and a logistical nightmare.  Thankfully this year all went a little smoother and I came away with British Champ F60-64.   The added bonus was that this gave me qualification to 2020 ITU Worlds (just in case I change my mind about retiring).
There was no let up with the following weekend being the Sprint Distance AG British Championships in Nottingham.  The Challenge Tri Camp Team had organised a familiarisation day and I took full advantage of it.  The run through, tips and bike course practise were excellent race prep not just for me but for all those who came along on the day.  I was secretly pleased to find the swim was cancelled due to the heavy rains. Even though the swim is one of my strengths, I just did not relish a swim in the gushing cold River Trent that weekend.It was again pleasing to get British Champ F60-64 and again qualification to 2020 ITU Worlds.
So 3 weeks, 3 races, 3 distances and 3 podiums.  Very satisfying but time for a rest!   The rest was forced upon me with a 3 week course of Radiotherapy and 2 week recovery. Not being able to train did hit me hard and it was a battle not to lose my confidence and motivation. I was thankful to get back to work and gradually pick up the training. Throughout all this unconventional season  Coach Nick has been superb and supported me all the way, keeping me on track and getting me back to form.
I must admit I wasn’t  happy when Nick suggested I do a Standard race before my A Races Aug/Sept and so I reluctantly entered Salford Tri. The day arrived and it was a relentless downpour – but I got on with it to see where I was, after all I had been through.   So now we are on the countdown to 3 final races for the year, including my A Races – all within the space of a week.  I have ITU Worlds Sprint and Standard in Lausanne and IM 70.3 Worlds in Nice.   A bit like buses – none for ages, then they all come at once!  I am thankful that Challenge Tri Camp have come up trumps with lots of course familiarisation videos and detail. The extra knowledge has helped with my race prep and training to get me physically and mentally prepared.
This has been such a fantastic year so far despite the unavoidable complications. It reminds me that I love triathlon and I love competing.  I am always grateful to the team at Challenge Tri Camp for their unfailing support in getting me ready for race day.
Added by the Challenge Tri Camp team, not only is Barbara a fantastic athlete and a great ambassador for the sport of triathlon she is all a lovely, kind and warm person, and is one of the most supportive people to other athletes that are just starting out in triathlon.  From Helen, Brent, Nick