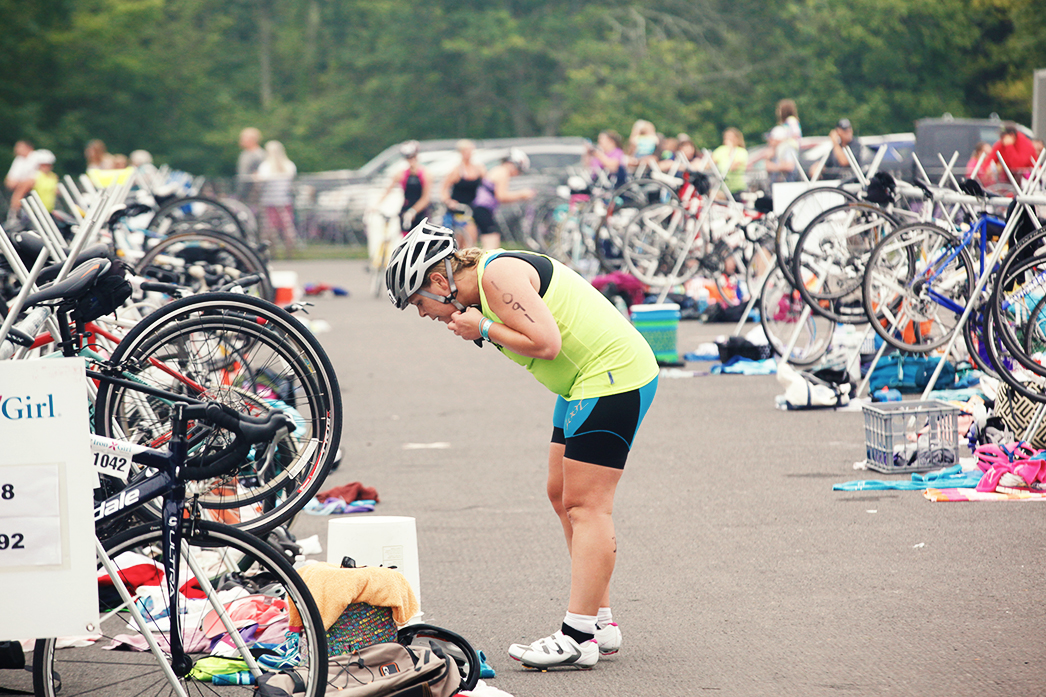 Are Transitions Important, by Hev’s

Transitions. If you’re going to do a triathlon there’s no avoiding these funny areas full of very expensive equipment that are essential when transforming from a swimmer to a cyclist or a cyclist to a runner. It’s a very bizarre experience the first time you venture into one, especially if you come from a single sport or not a sporting background at all.

So when you’re competing in a sport which entails three different disciplines anyway, how important actually are transitions…?

How important are transitions?

The only possible answer to this question is – very.

It doesn’t matter what distance triathlon you are doing they are important. The amount of people who come to me and say they are doing a long distance event so their transition time doesn’t matter makes me want to smack my head against a brick wall (but I don’t – mainly because it would hurt).

Lets break this down; you are new to triathlon and just want to complete the event and enjoy it – in this case maybe your transitions aren’t as important as if you had a time/position related goal, and this is perfectly common and makes complete sense. However, you will still work hard during your race so if you then look back and realise you added an extra 10 minutes onto said race by having a cup of coffee and a biscuit in transition, unnecessarily, then it’s a waste of time and just leaves you out there in the race for longer. If through no extra effort on your part you can speed things up and make the whole process easier then why wouldn’t you? That way you’ve got your finishers medal and are wrapped up all nice and warm with a brew (or beer) on your adrenaline high 10 minutes sooner. It’s a win win situation. Save time, save energy.

Next scenario; you are not new to triathlon so you know how transitions work. You are aiming to improve your time from last year in an Olympic or Sprint distance. You work hard in training and know that you are fitter and faster than before yet you spend an extra 20 seconds dilly dallying in transition, doing things that really don’t need to be done like brushing your hair and shining your shoes so you look good for the finishers photo (the finishers photo is important by the way). To put this into perspective – how long would it take you to knock 20 seconds off your 400m swim time in the pool? For most of us it would take a very long time, if it were even possible. So why would you make all these improvements and then add time on in transition which could have been avoided?

Third scenario; you are aiming to qualify for the Sprint World Champs which is now a draft legal event, as is the qualifier. This means you would likely benefit from getting into a group on the bike and cycling in a pack. You have a cracking swim and come out of the water with a big bunch of athletes, then by the time you’ve gotten past the mount line, you are alone. Where did everyone go? They are all working together somewhere up the road, leaving you playing catch up, which with a bit of practise could have been avoided with very little extra effort.

Final scenario; you are competing in an Ironman, therefore transition absolutely does not count. Cue a head bang against the wall by me. Ok, so firstly if you are new to triathlon or your goal is to complete the distance you may be concerned about cut off times – a lot of us are. So you spend 20 minutes in each transition painting your toenails and packing your picnic for the bike, therefore knocking 20 minutes off the time left available for your cycling and run leg. Why? If you are concerned about cut off times transition is a place to get in and out. This doesn’t mean sprinting through or going so fast you forget to put on your helmet, it’s just about not wasting time.

Ok, so now your doing an Ironman and you’re either a) going for a target time or b)aiming to complete it but you’re not so worried about making cut off times. You hit transition(s), have a breather and a bacon butty and then crack on. Your finish time is 13hrs02minutes. You spent at least 10 minutes in each transition having a sit down. How gutted are you with that extra 2 minutes? Even though you’ve done well and achieved a fantastic time that 2 minutes will irk you for the next few months, especially when looking back, you know exactly where you could have made up that time – your transitions.

So, you see transitions are extremely important. They are the 4thdiscipline in a triathlon, the glue that holds it all together. They can be intimating and daunting at first and I am by no means saying that you need to be superman, especially if you are new to triathlon and just want to complete the event. What I am saying is that I have seen so many people waste time and energy by unnecessary tasks in transition which could have been easily avoided. This gets them more flustered and worried and in turn they enjoy the experience less than they could have done. Transitions are part of a triathlon. They are part of the event and so should be treated with the same respect as the rest of the race. You will make mistakes, you will mess things up sometimes and there will be things to learn from and that’s part of the process. But why waste time and energy for no reason?