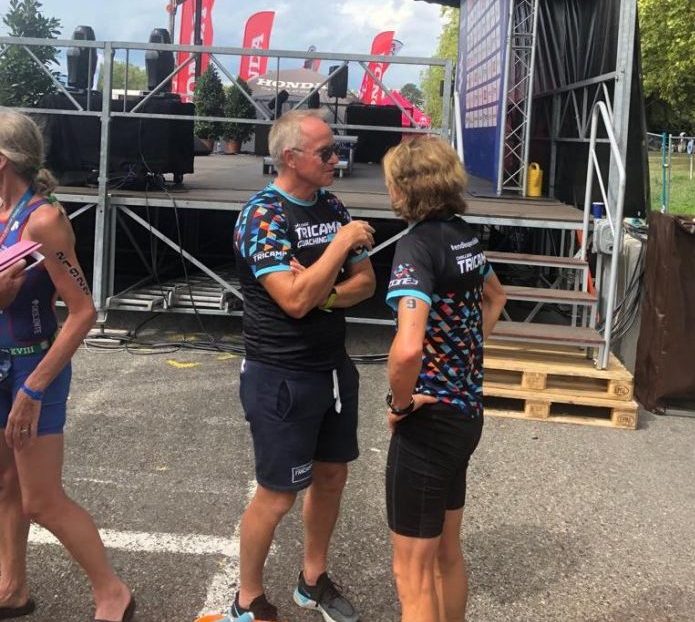 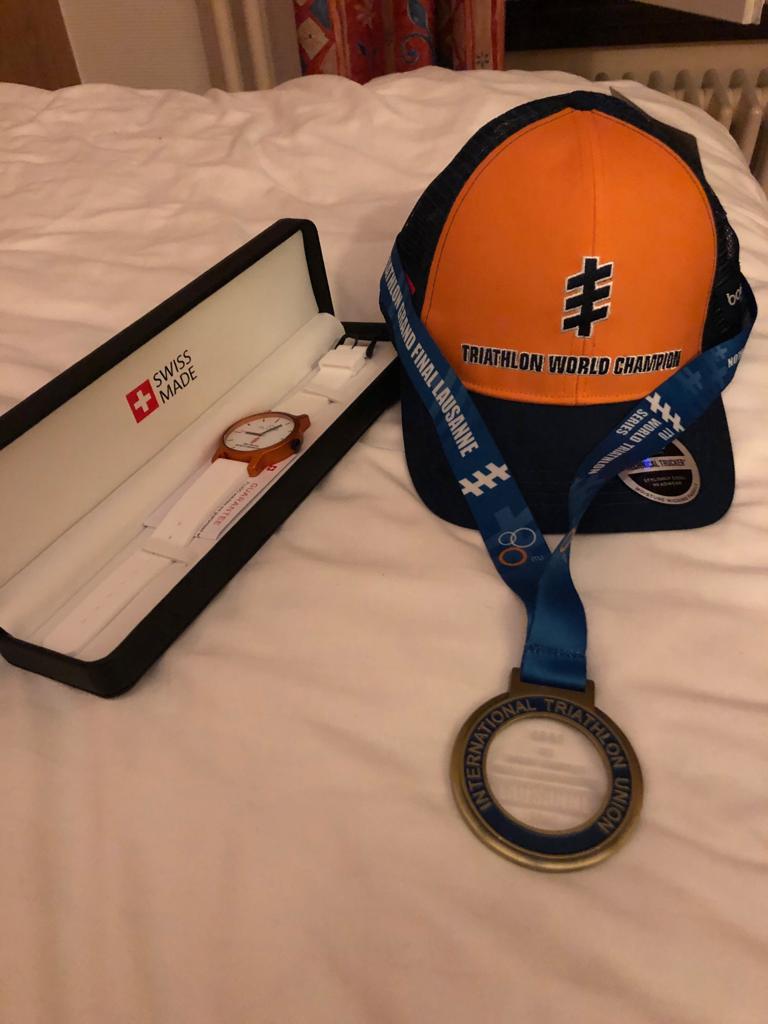 Emma Fisher – ITU Sprint Triathlon World Champion – coached by Brent Perkins Joint Head Coach
At Challenge Tri Camp we are so lucky to work with and coach fantastic athletes of all abilities, some just starting out on their triathlon journey and some that achieve a longer term goal, which is what happened this weekend.

One athlete that I work with and coach is Emma Fisher. Emma has been racing triathlon and Age Group since approx 2015 and has had some very good results during the past 4 years but she had never won a Gold Medal or a World Championship. This was a long term goal of hers, so Emma and I started working together in May 2018 with our number one target to become Sprint World Champion, “so no pressure for me then”! During the first few months we established a great working relationship and started to work together as a team. We talked and agreed what races and and what our first year targets were going to be. With most age group racing you have to qualify normally the year before the championship that you will race, and Emma had already qualified for the ETU Sprint Champs in Glasgow on 11 August  2018 so our first target was a top 3 finish at this race. Emma won Silver, a great start, this established the base lines we needed to plan our training profile.

Over the coming months we worked hard on improving Emma’s swim, such is Age Group racing now that if you can’t swim with the front pack its hard to make up ground on the bike and run, especially at ITU level. We met together monthly to monitor progress, undertake video analysis, feedback and continually improve and refine Emma’s stroke in the pool. We also worked hard on transitions as this is an area that is sometimes overlooked. I also felt that a solid season of duathlon training and racing would help with run speed and bike skills, Emma had never raced a duathlon until October 2018, so this was going to be an interesting baptism. We entered the British Championship qualifiers Standard Distance rather than the Sprint to see how the training process was going. Emma won her Age Group and also had the fastest Female time on the day, this provided a qualification slot for the the ITU World Duathlon Championships in Pontevedra 2019 Standard Distance. Emma won her age group by 9 minutes at Pontevedra and become a Duathlon World Champion, but as it says at the start of this little blog our aim was to win the World Sprint Triathlon Championships.

So why all this racing at Standard Distance, well that’s a good question, simply to establish a solid base before we started focusing on speed work, and race course specific training for each Sprint event. We also decided to race the Leeds British Triathlon Age Group Championships again at Standard Distance, Emma won her Age Group and became British Champion.  So far so good, we now had approximately 10 weeks until the “A” race or races, as Emma had qualified for both the Sprint and Standard ITU events. We shifted our training profile to see if it would be possible to race both races at Full Gas. But during the Leeds race a slip during the race seemed to cause a little niggle, but unfortunately it was a little more than we thought, a calf muscle tear was diagnosed, then a bike crash during training and finally a chest infection meant that we were very limited in the last 6 weeks to do any run training. So we shifted to Aqua running after swim sets and X training machine to help with run strength, As many people say “where there is a will there is a way”. In final prep for Emma’s “A” races we spent a couple of days in Mallorca swimming together practising fast starts and sighting in the open water, we worked on run technique and bike climbing and descending skills, all very short sessions, plus we had a couple of beers and ate pizza, as all athletes do right! Emma then travelled out to Lausanne with her husband and 4 children, the best support crew for the day. So race day has arrived, and now its down to the athlete.

The Sprint Age Group that Emma was racing was a tough one and also the bike and run courses were very tough. The athletes racing included recent and past World Champions, plus Sydney 2000 Olympic Gold Brigitte McMahon and Olympic Silver medallist Michellie Jones, a stunning high quality field with pretty much the strongest Sprint athletes seen in a race in the last few years, it was definitely the one to win! Emma turned herself inside out on race day, with the best swim she has ever had, coming out about 60 seconds down but in touch, she then had the fastest transitions of anyone in the Age Group about 20 secs quicker overall, (an important number), her bike split was a little slower than planned but worked in Emma’s favour as the little power saving on the bike allowed Emma to run a mega quick 5k 19.05min making her 2ish mins quicker than anyone else on the course. Emma become World Champion by a winning margin of 16 seconds. Emma also raced the Standard Distance the following day after not feeling very well overnight so our agreement was to race it but enjoy it, this produced a 4th Place racing the best Age Group athletes in the world, she also had the fastest run split within the Age Group of 41.04 so not a bad day.

I think the summary below says it all:-

Emma Fisher produced a stunning race performance to beat the Sydney 2000 Olympic Gold Brigitte McMahon and Silver Michellie Jones medallists, in what was a incredibly high quality field with pretty much the strongest Sprint athletes seen in a race in last few years. That makes Emma the Triathlon (Sprint) and Duathlon (Standard) World Champion this year, plus she is also the British Champion at Standard Distance.

I am so proud of what Emma has been able to achieve this year, she works full time, has 4 fantastic children, her husband Mark is super supportive and races himself. Looking forward to what next year brings, but I guess now I am working with a World Champion we better stop doing beer together.

Emma has said “please can you add quote from me that none of this would have happened without “You and the support network of Challenge Tri Camp. What I learnt this weekend was that if you believe and trust in someone to help you, then you can then do things that are sometimes out of reach. I feel very lucky to have you, Challenge Tri Camp Team and my family. #challengetricampthebest#eyesatthefrontofyourheadtolookforward